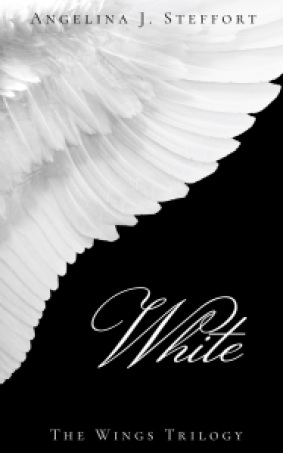 “I love you,” he said with a smile on his lips. And then his eyes snapped open, flashing green. A radiating white blur shot out from between his shoulders, smashing everything within reach. I was thrown to the ground by the force of it and something hard hit my head. The last thing I saw was Adam’s shape against the white radiating light that seemed to have its source inside of him…

When 18 year old Claire Gabriel meets Adam, her life takes a drastic turn. He seems to have stepped right out of a fairy tale, he shows this alien glow in his eyes, and he is beautiful – more than anything.

Before she can think twice, she finds herself in love with the mysterious boy, unable to evade the dark shadow their feelings for each other draw up; because Adam isn’t the only mysterious creature hovering around Claire.

Soon Claire finds herself a target in the the eternal war between good and evil . . .

“Angelina J. Steffort has crafted a deeply engaging world with a level of astounding detail. For an author’s debut, this is world-building at full power and romance writing as it should be.”

There always has to be somebody who takes responsibility for our sins. When I was a child, I thought it was God. When I didn’t believe in God anymore, there was a time when I thought others would take the blame. Now I know it is me, and no one but me. Everything else is a lie, and lying is a sin. . .

“Chocolate fanatic, milk foam enthusiast and strict fan of the southern sting-ray. Writing is an unexpected career path for me.”

“Angelina J. Steffort was born on February 28th 1984. She has multiple educational backgrounds, including engineering, business and music. Angelina writes YA fantasy and is the author of The Wings Trilogy, currently working on the second part. Her debut novel White was released on April 19th 2017.

Want to know more about her? Find her @

One thought on ““White” – New Release by Angeline J. Steffort”

This site uses Akismet to reduce spam. Learn how your comment data is processed.

© Georgia Kostopoulou and Chill and read, 2016 – 2021. Unauthorized use and/or duplication of this material without express and written permission from this site’s author and/or owner, is strictly prohibited. Excerpts and links may be used, provided that full and clear credit is given to Georgia Kostopoulou and Chill and read with appropriate and specific direction to the original content.

Find an Author or a book

Series I want to read next year For English, pleas

The Worst Best Man by Mia Sosa For English, please

The Lamplighters For English, please scroll down